What is Izumisano? “The gateway to Japan where you can enjoy the sea, mountains, and sky.”

Izumisano City has a population of approximately 100,000 and is located on the shore opposite Kansai International Airport (KIX), in the southern part of Osaka prefecture.
With Osaka Bay to the west and Izumi Mountain Range to the east, Izumisano is located in a natural area that is blessed with an abundance of beautiful mountains, rivers, and greenery.
Since the number of international visitors using Kansai International Airport has dramatically increased in recent years, we are working hard to build a city by aiming at “Izumisano, an international city with its arms open to the world,” as a gateway city that connects Japan with the rest of the world. 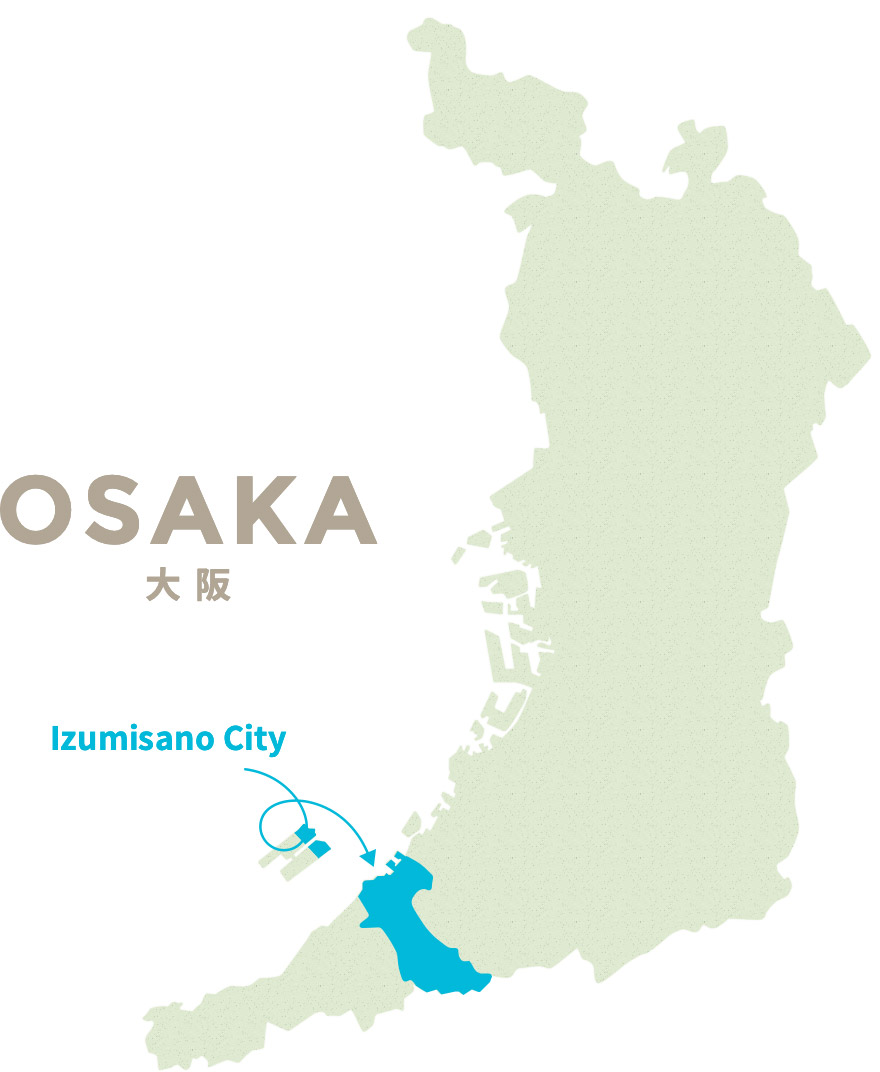 Please click the following link to see the “Izumisano City Overview,” which summarizes the city.

Kansai International Airport (KIX), an offshore airport built on a man-made island located on the shore opposite Izumisano City, is an international hub that is able to operate 24 hours a day.
Not only can people enjoy the various events and educational tours that take place there, but also dining and shopping at the Terminal Buildings or Aeroplaza.
The observation deck at KIX Observation Hall “Sky View” offers a place to see the spectacular sight of planes taking off and landing. At night, a world of lights opens up that illuminates the airport, and they appear scattered about like jewels.

Experience the beauty of both theSEA&MOUNTAINS

Since Izumisano is surrounded by the sea and mountains, you can enjoy them both here.
The seaside area has no shortage of things to check out including the beautiful sunsets at “Rinku Park,” the shores blanketed with white marble pebbles at “Marble Beach,” the shopping and dining on offer at “Rinku Town,” which incorporates large-scale shopping centers, the fresh-caught seafood on sale at “Aozora-Ichiba (open-air market),” and the cruises you can enjoy at “Izumisano Kanku Marina.”
In the mountain area, you will find “Mt. Inunaki,” the site of ascetic training for nearly 1300 years. At “Gyoja-no-taki” (ascetic falls), which is still visited by ascetics from all over the country, you can experience Shugendou training. The pilgrimage route to “Shipporyuji Temple” is a hiking course where you can enjoy the beautiful gorge filled with a pristine forest and seven waterfalls.
After experiencing Shugendou and the hiking course, come and enjoy the hot spring and the dining at “Mt. Inunaki Hot Spring” found at the base of the mountain.

Local specialties and food culture cultivated by the land

In Izumisano, there are plenty of local specialties.
Accounting for nearly half of the towel market in Japan, “Senshu Towels” are of the highest quality and feature superior softness and absorbency. They are available for purchase at “Senshu Towel Kan” and elsewhere.
Famous agricultural specialties include “Mizunasu eggplants,” “Senshu onions,” and “Matsunami cabbage.” Famous seafood specialties include “swimming crabs,” “gaccho (big-eyed flatfish),” and “Izumi octopus.”
Also, at “Kitashoji Sake Brewery,” the city’s one and only sake brewery, not only is locally-brewed sake available for purchase, but various events and other functions are held in the “Kura-classic Hall” on the second floor of the brewery.
We recommend “Izumisano Machidokoro,” “Rinku Machidokoro,” and “Kanku Machidokoro” as good places for Izumisano souvenirs.

A town to appreciate the history and culture that the abundant nature of the area has cultivated.

There are many historical buildings and landmarks that still remain in Izumisano.
Built in the Kamakura period, Jigenin Tahoto Pagoda is designated as a national treasure.
Also, Hinenosho Manor is a precious site from the middle ages, which was part of the Kujo family estate in the area currently known as Izumisano, from the Kamakura period to the Sengoku period. The manor still features some of the architecture, scenery, and festivals that were depicted in ancient writings and pictures that describe the period, and it was designated as “Japan Heritage” in 2019.
Another landmark is the “Izumisano Furusato Machiya-kan Museum,” a preserved machiya (Japanese traditional-style townhouse) from the Edo period. It is open to the general public, so please be sure to experience firsthand the Japanese culture and ambiance you can only get a sense of there.